I said that I wasn’t going to audition for the show.  I was definitely sitting this one out…

Yeah, of course I auditioned!  Even though I was a little overwhelmed with the kid’s senior year activities, I auditioned.  What I didn’t expect though, was being cast into a role that would really make me look at my life.

The show is Working, a musical with a book by Stephen Schwartz and Nina Faso, music by Schwartz, Craig Carnelia, Micki Grant, Mary Rodgers, Lin-Manuel Miranda and James Taylor, and lyrics by Schwartz, Carnelia, Grant, Taylor, and Susan Birkenhead.  The musical is based on the book by radio personality Studs Terkel, Working: People Talk About What They Do All Day and How They Feel About What They Do (1974), which has interviews with people from different regions and occupations.  I had originally auditioned for the role of the Millworker (which is a well-known song by James Taylor), but ended up being cast at Kate, the Housewife, who sings the song, Just a Housewife.  The song tells of Kate’s experience of daily activities and how what she does and thinks may not matter to anyone else, but it does to her- That she’s MORE than just a housewife.

While I’m preparing for this role, I’ve also been cleaning out our basement- you know- Marie Kondo-ing everything, when I came across a few things.

First, I found a sealed envelope that had Jennifer Angarano written on it.  Hmmm.  Why would I not have opened something from like 20 years ago or so?  BECAUSE I WAS MEANT TO FIND IT NOW.  Lately, I’ve felt useless, obsolete, just a boring “mom”- but this letter said otherwise.  Here it is (minus certain identifying marks of the person who wrote it- although some may figure out its author): 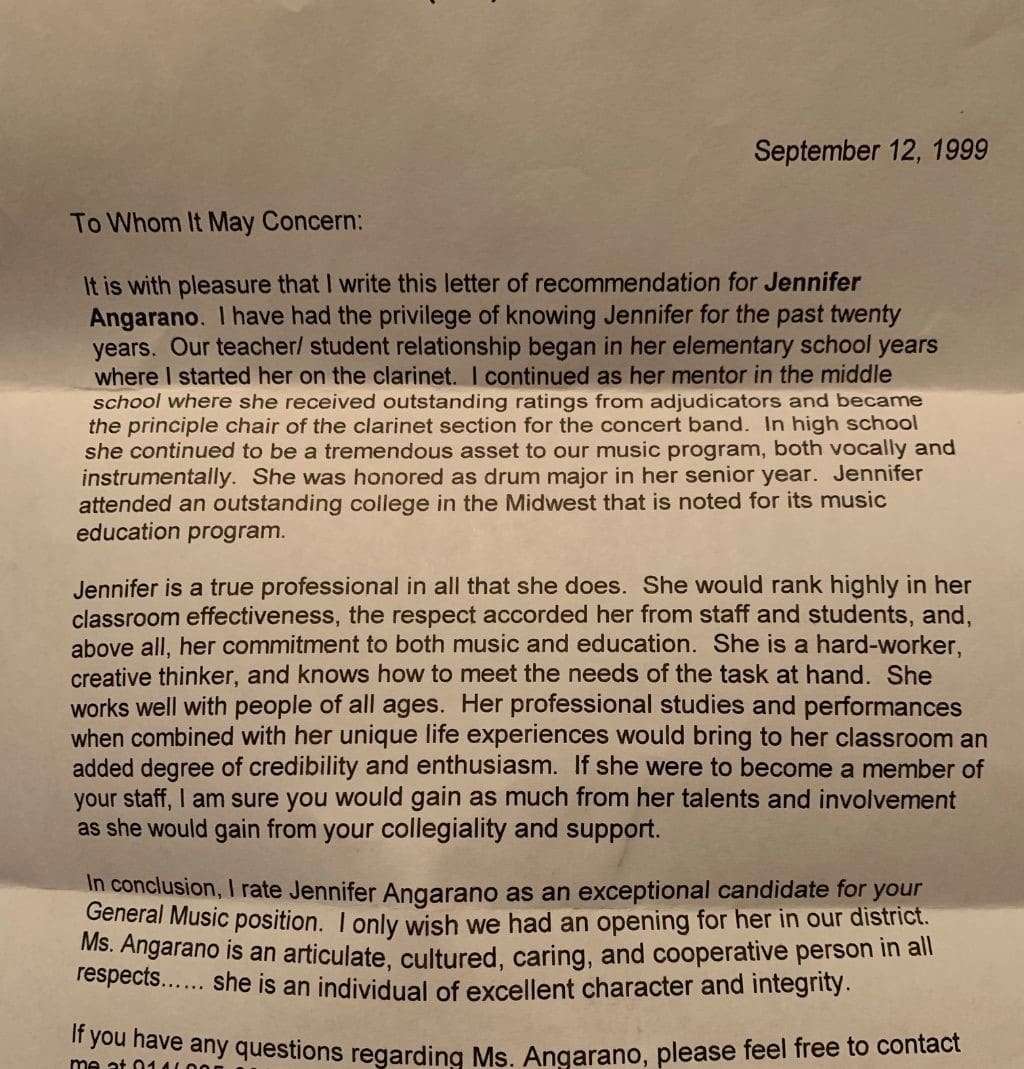 I’m NOT just a boring, middle-aged mom- I AM A MUSICIAN!  And a good one!  So many people know me for singing at church, baking cakes, etc.- but not everyone knows that I have a degree in Music Education, and honestly, even I forget that in my day to day activities.  I can sight read anything you place in front of me, and then analyze it! Ha!  This letter made me feel like a million bucks, and it came at a time when I was feeling more like a bounced check!

Next, I found my old art portfolio.  The zipper was rusted shut, so Anthony & I had to cut it open, but when we did- a treasure trove of myself was released!

When I was in my mid-twenties, I wanted to be Carmelite Nun.  I was particularly interested, and on board to enter a group of nuns that were three monasteries combining to form one newer and larger monastery.  Here is a triptych that I painted for them.  The outside had the logo of three Carmelite Communities becoming one, and the inside is Our Lady of Carmel, flanked on either side by St. Teresa of Avila and St. John of the Cross, the founders of the Discalced Carmelites.

I was very interested in painting religious miniatures at that time, and here are two of those (not great quality pics, but, hey-not bad for an iPhone): 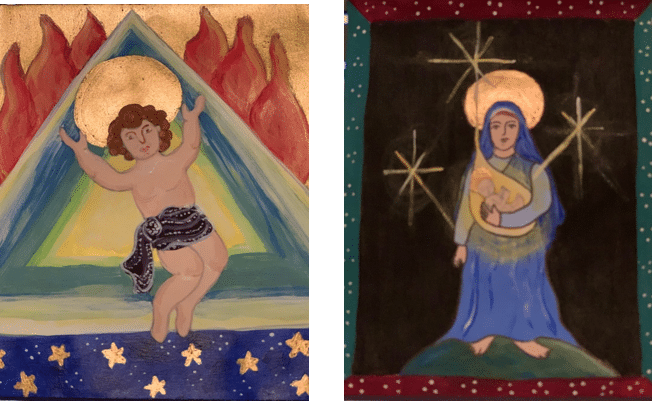 The Holy Trinity, with Heaven and Earth /// The Virgin Mary and the Conception of Jesus

I also found a few religious songs that I wrote, but that can be for another story…

So, you see, we bury ourselves in our day to day activities and duties, and sometimes we lose the fact that we are much, much more than those activities and labels that are put upon us.  Maybe I AM a housewife- but I am a hell of a lot MORE, too!

Peace and love to each of you.

Come see me be Just a Housewife in April in Working, a Musical.  Here’s the info: 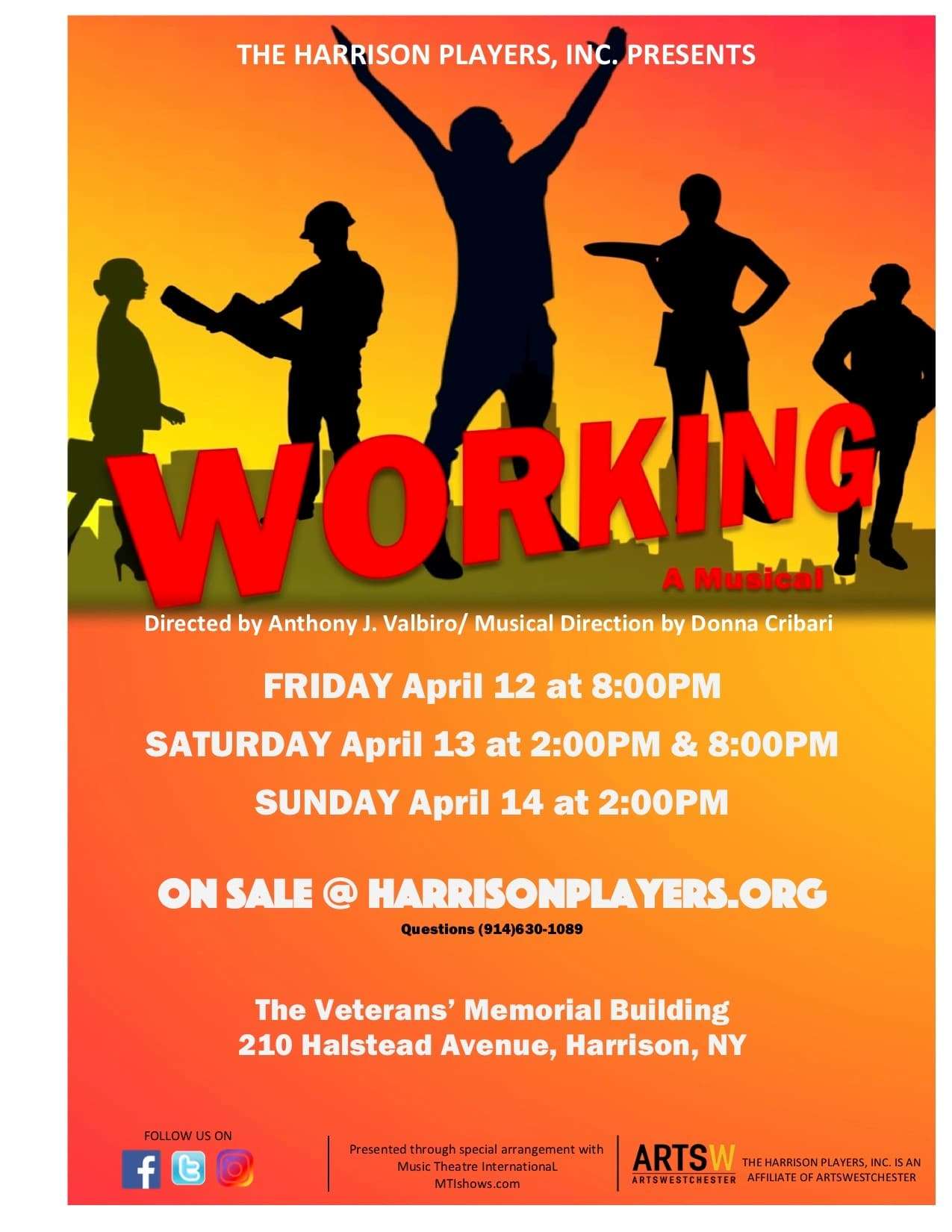 Here’s the song, too- I KNOW you’re waiting to listen…

Jennifer Angarano Ricci is a wife, mother & creative soul-searcher.  She is a musician, artist, and baker, and runs her home business Baked By Jen, in addition to running her local community theater group.  She loves to sing, create and help others and tries to connect all three passions whenever possible.