Everything in its right place – the freezer section.

BY: Julie Slater – “The Lotus Flower”

For the past six months, I’ve had an issue with my right shoulder. Kind of came out of nowhere and I had tried a few things (doctors, chiropractor), but nothing worked. I made an appointment with an Orthopedist for an X-ray. His office was close to home, so I decided to walk. As I drifted down the street, I put my earbuds in and started zoning out a bit while listening to a mantra of a song – “Everything in its right place” by Radiohead.

I was totally in the moment and deep in thought. Very Zen-like. Feeling like my life WAS falling together – in its right place. Decisions I have made, although super scary, have felt spot on. Life was feeling and lookin’ good. I was even – dare I say –a little proud of myself.

This, of course, is exactly when I apparently missed a bump in the sidewalk and my body went flailing into the air and then SPLAT! onto the ground. Now, the fall itself probably wasn’t so bad (sure, a couple of scrapes), but THE SHOULDER. Oh my, terrible pain.

I composed myself and hobbled off to the doctor. Got some band-aids. And wondered what it all meant.

The X-rays came back fine. But I was diagnosed with “frozen shoulder.” Apparently, your shoulder can get inflamed, sometimes for no apparent reason. You stop using it as much because it hurts. Not using it makes it “freeze” up.

That’s all fine and good, but let’s back up a little, doc. What’s the bigger picture here? Why did I have that spill while in the zone of tranquility?? WHAT ABOUT EVERYTHING IN ITS RIGHT PLACE??!

Then it hit me. Is everything EVER in its right place – all at the same time? How can it be – when things are constantly moving and flowing? Nothing is permanent, dear Buddha.  And one thing is for sure, if we don’t keep moving – we freeze up.

This is one of the reasons I have started taking some chances. I’ve gone against the safe route and left a job that brought in some regular income to dedicate myself to a line of work that is anything but regular – voice work (commercials, audiobooks, etc.). I’ve made a clear intention that this will be my new life and darn it, I’m doing it.

But fear does try and rear his ugly head on occasion. In fact, I think I hear him knocking on my front door right now. Shhh. I’ve dimmed the lights and am keeping quiet, so he doesn’t think I’m home.

I’ve also decided to build my dream life from the inside out. And with that comes gratitude. I’ve been keeping a gratitude journal for more than two years now. 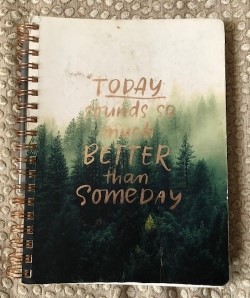 (“Today sounds so much better than someday”)

I write down 10 things I’m grateful for (almost) daily. Some days my gratitude for “being alive” is as strong as my thankfulness for “coffee.”

Meditation has also been key. It gives me a few minutes to sit in my thoughts – whether they are super empowering ideas or just reaffirming ones about not being consumed by troubling thoughts.

It’s interesting how much the “unknown” can frighten us. Shake us to the core. There’s some part of us that wants to know exactly what is going to happen next. But how boring would that be?

My friend, Jaime, recently became a member. She just left LA with her fiancé and moved to Atlanta. She also bought a fixer-upper there that she is afraid is an insane money pit.

(Jaime and her “money pit”)

We check in with each other to support one another’s leap. It’s our very own leap-ers support group. (The coffee at the meetings is delicious.)

She texted me that she found out her worst fears came true and the house she bought needs all new plumbing (amongst other things). I told her to take a deep breath and repeat after me:

“Oh, hi there, terrible problem. Welcome aboard. I’ve been waiting for you.”

One day I was anxiously staring into my own dark abyss of the unknown and she wrote back:

And she’s right. Being stagnant is for suckas!

We have no idea how many days we have left on this earth and we certainly need to make the best of them. I get up every morning and get to feel what it’s like to go after a dream. And I get to stand in my belief that it’s all going to work out. Even if everything isn’t in its right place all the time – and some parts are frozen – everything is exactly where it needs to be. 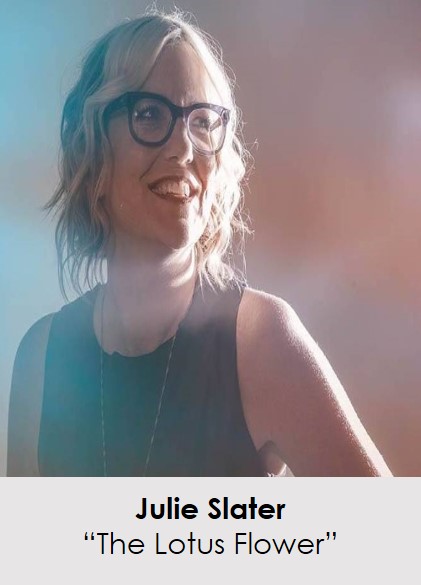 Julie Slater, aka THE LOTUS FLOWER, looooves music. Besides being a musician, you may have heard her DJing on top stations: 92.3 K-Rock in NYC as well as 100.3 The Sound & Alt 98.7 in Los Angeles. She also curated & hosted a new music/indie show called Out on a Limb on 88.5 FM in LA.

When she’s not at concerts, you can usually find her in the kitchen. And she has a slight obsession with deep, dark cabernets & a well-made Old Fashioned. Cheers!