Why Is It Great To Live In Harrison?

BY: Janis Gaudelli (with special guests) 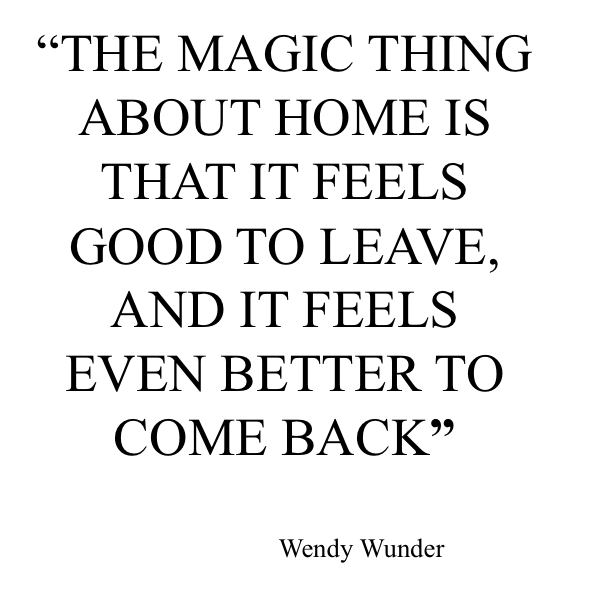 Today, Harrison residents of all ages celebrate the 41st “It’s Great to Live in Harrison Day”.  This annual celebration is one of my most vivid memories of growing up in Harrison.  My friends and I would watch the parade in front of The Family Discount Center, and I would anxiously wait for the HHS Band and Majorettes to strut down Halstead Avenue—to me, they were the highlight of the parade!  My friends and I would then make our way up to the station park where the “Great to Live in Harrison” festivities came to life.  Walking up the Harrison Avenue hill, you could smell the delicious foods prepared in the park by Harrison community members: pizza fritta, meatballs, teriyaki chicken skewers, candy apples, and more, just wafting through the air.  The noise level added to the excitement as laughter, screams and joyous conversations echoed throughout the park.  Kids were everywhere, eating, getting their faces painted, square-dancing & spraying their friends with silly-string.  Fun was had by all and the fondest memories were made.

When my teenage years hit, this born-and-raised Harrisonite became bored with what Harrison had to offer.  I was 16 years old, and I began to get the itch. I wanted to (and did) break loose and explore other places, so my friends and I escaped to the surrounding towns of Port Chester, Rye, New Rochelle, and White Plains to seek out fun and adventure.  That’s when I began to wonder, “What exactly is so GREAT about living in Harrison?”

Once I got to college, Harrison became just a place that “I grew up in” and I was finally jumping ship.  After graduating, I moved out to Scottsdale, Arizona.  I lived there for three years before I felt an indescribable pull to return to Harrison.

A little over a year after being back in Harrison, I once again got the itch to leave, and I moved to New York City.  You want to talk about fun and adventure?  NYC is the breeding ground for all that and more.  After living in NYC for eight years, I’d had my fix of fun and landed an opportunity to move to Los Angeles.  I had always wanted to see what it was like on the left coast, so I jumped at the chance. I fell in love with those snowless winters and the SoCal approach to work-life balance.  I honestly thought I would never leave, but 7 years later that familiar gravitational pull took over me again. This time, though, I was pregnant and waiting to deliver a boy into the world, so I began to seriously consider how and where I wanted to raise him.  Living in all the places that I had, I realized how important and rare east coast values truly are.  That was my motivation behind leaving Los Angeles and moving back to Harrison.  Here’s the thing: all three times I have returned to Harrison, it welcomed me back with open arms.  That’s when you know you’ve returned home.

My son is now 7 years old and a student at Harrison Avenue School.  Now that I’m a parent, raising a child here, I have a developed a new lens on this town, and I see why people would want to live here.  I now know why my parents raised four kids in Harrison.  It’s because Harrison is so much more than just a town in Westchester.  That’s what I was overlooking, really.  I was moving away from a ‘place,’ one that didn’t serve a restless soul like mine.  But what pulled me back time and time again, were the people.  It’s the people who inhabit this town that make it great to live in Harrison.  My blog today is made up of some of those people, true Harrisonites who were born and raised here, and some who never left.  I asked them to be a part of this blog, to celebrate the town we grew up in together on “It’s Great to Live in Harrison” day.  Each person was asked a simple question, “what’s your fondest memory of growing up in Harrison?” and here’s what they had to share: 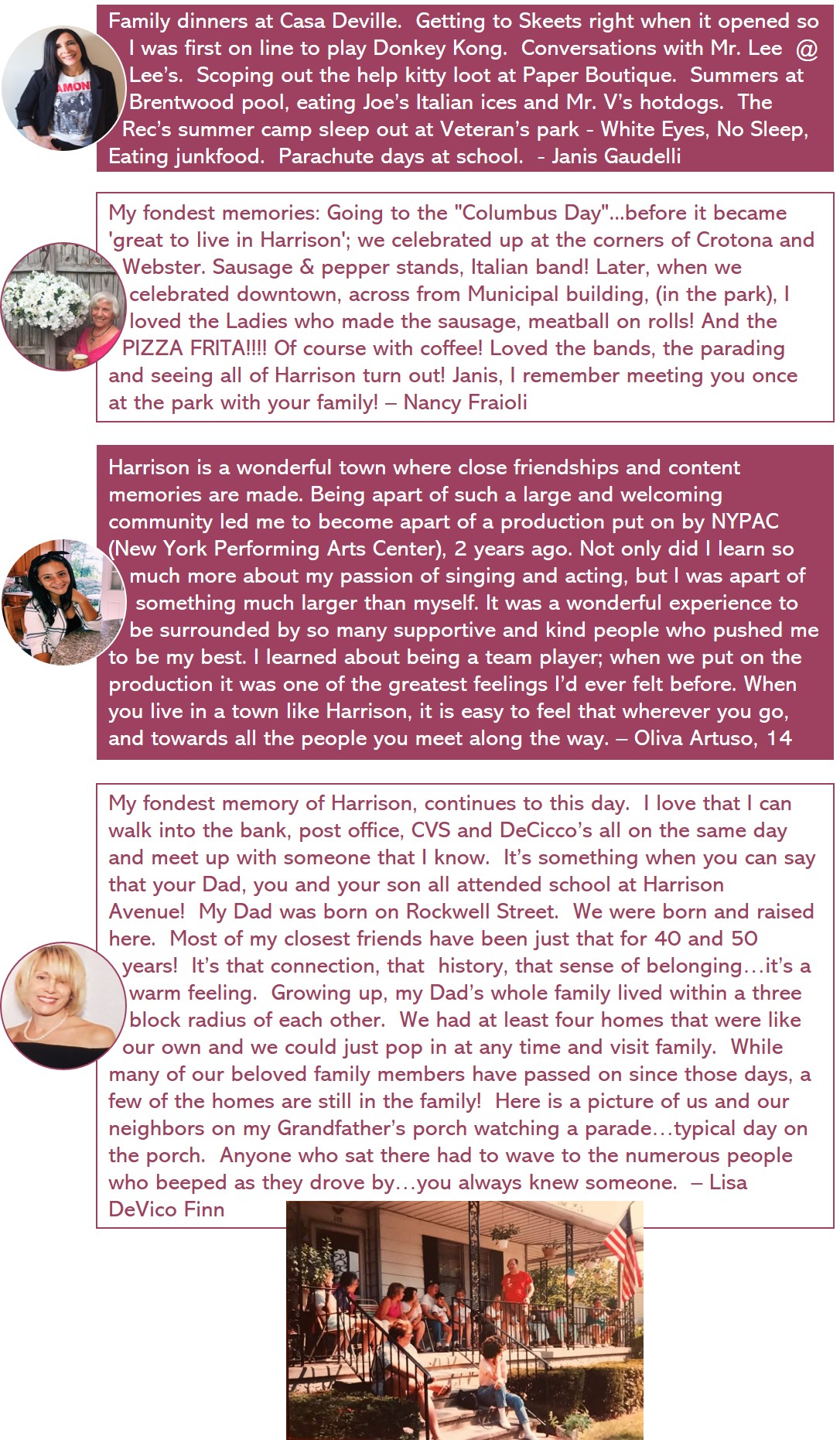 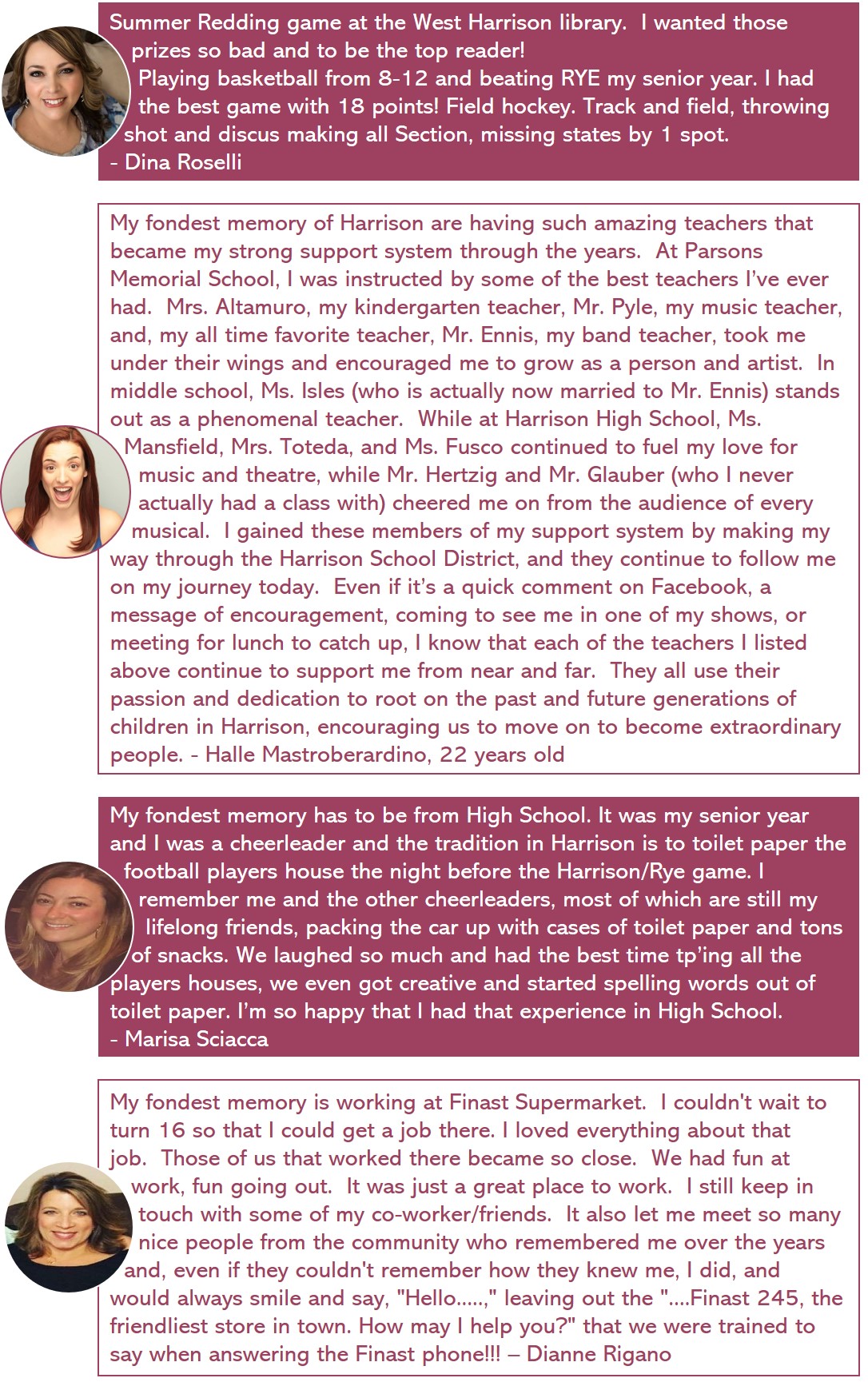 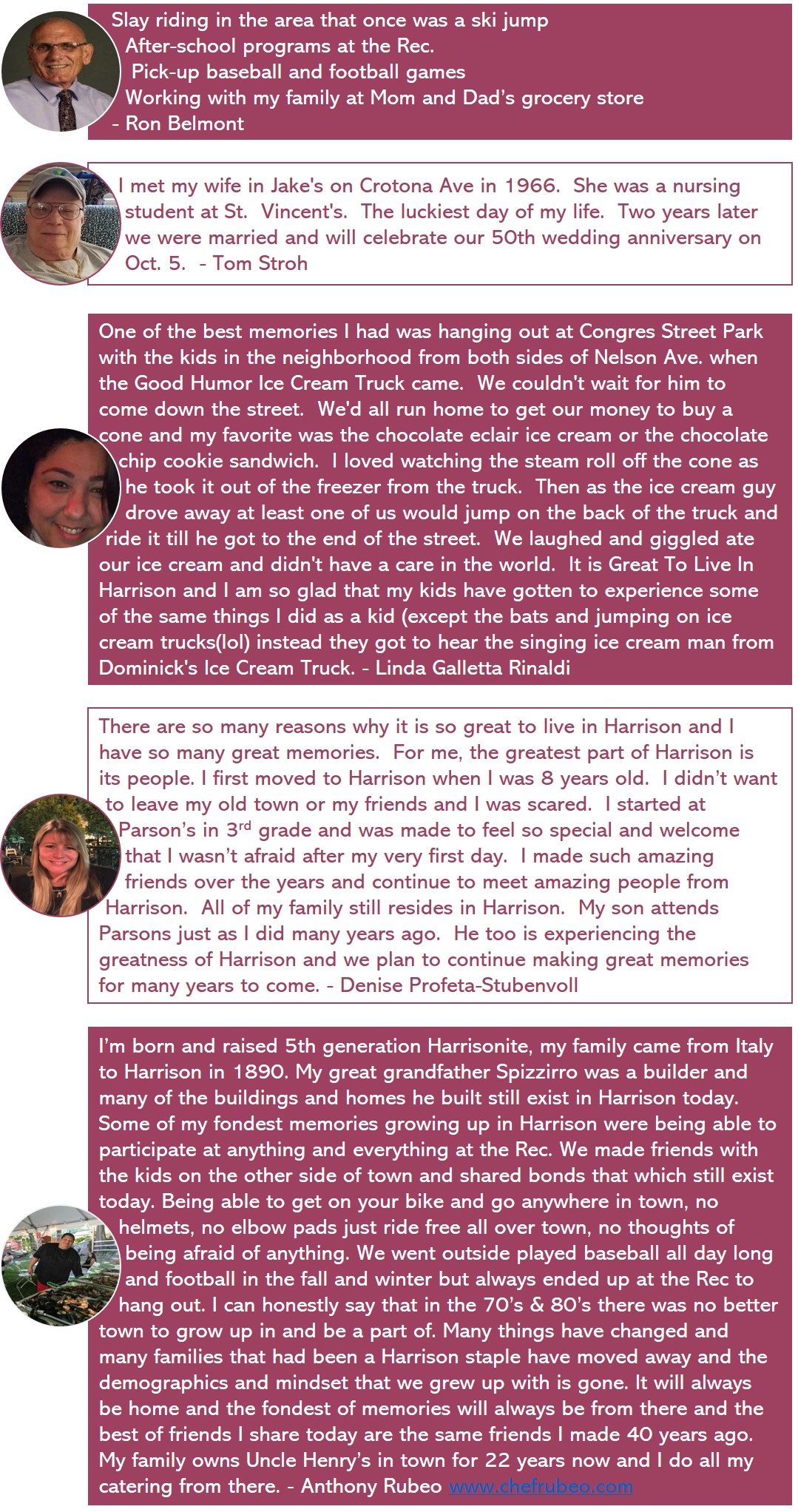 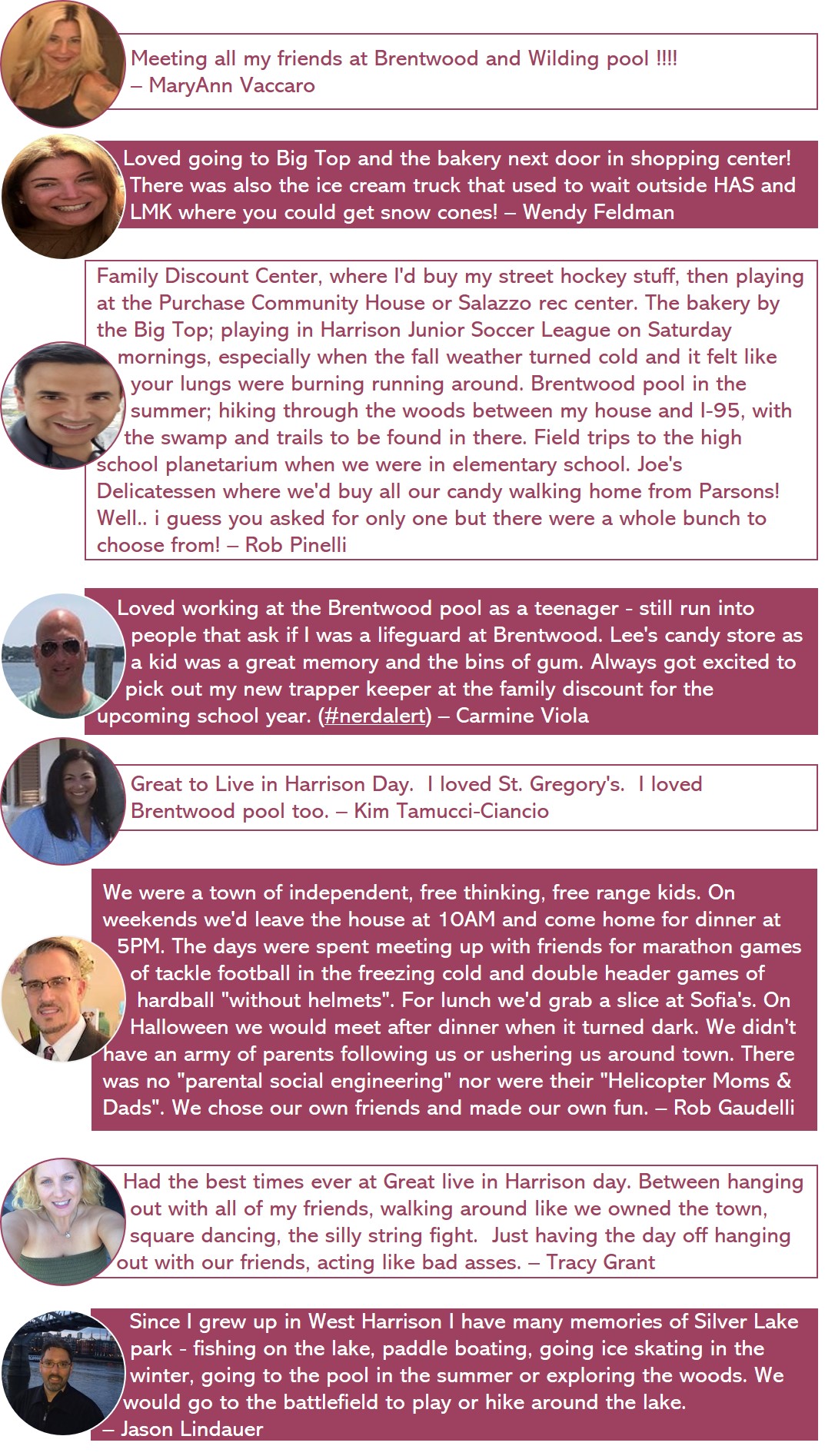 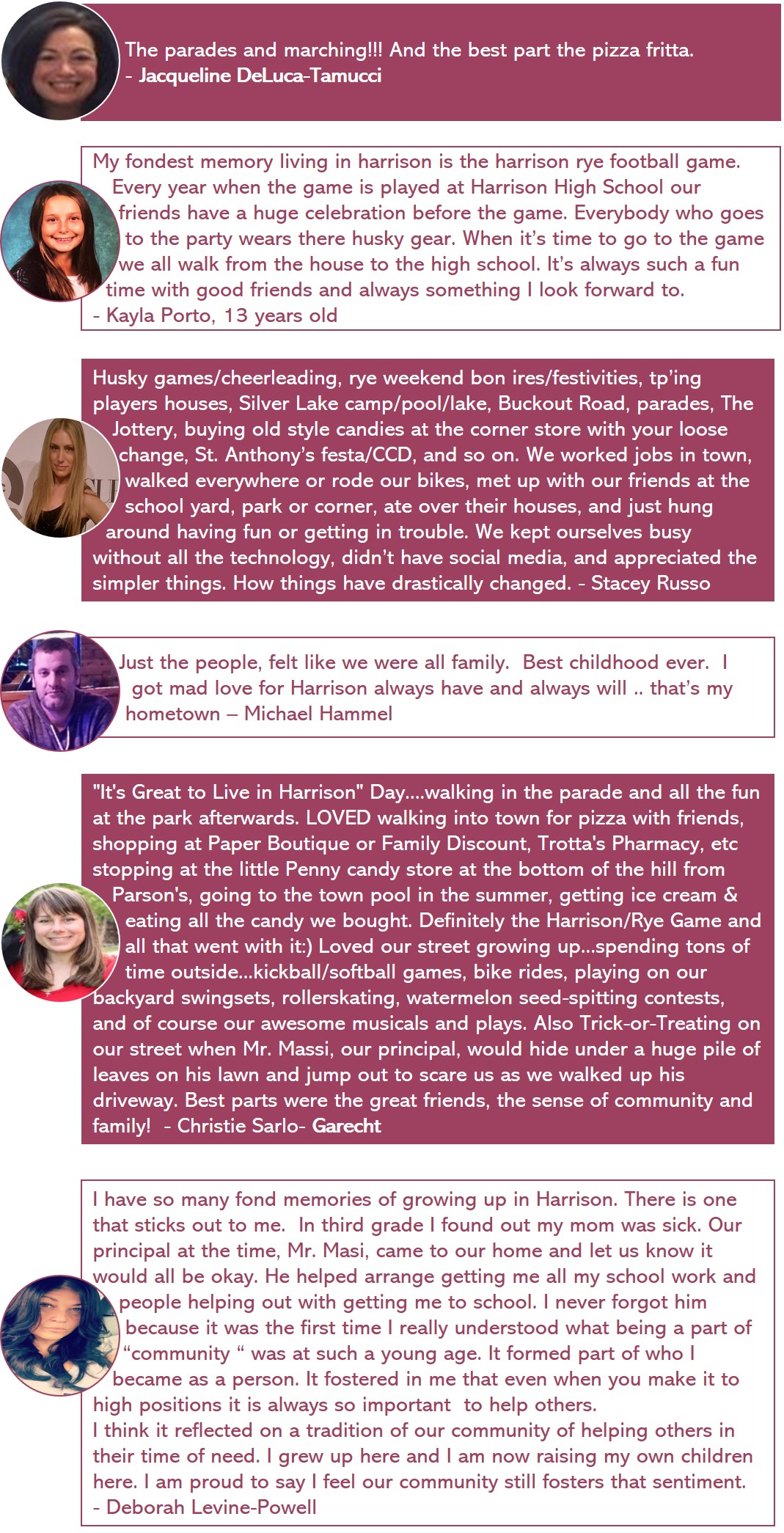 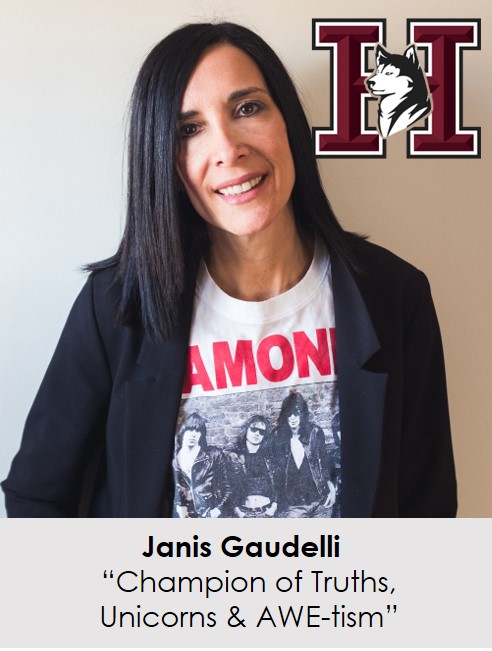