More than Meets the Name

What’s the first thing you do when you meet someone new? Maybe you shake their hand or maybe you start with a smile, but somewhere in that ice-breaker conversation, you say, “My name is _______” (Fill in the blank). It’s interesting how all of a sudden you think you know this new person just because they have revealed the label they answer to. It’s also interesting how many people automatically associate characteristics with that new friend just by hearing their name.

Let’s use my name for example – Anastasia. Anastasia Elizabeth Meininger to be exact. I know its a bit of a mouthful, but I happen to be one of the seemingly few people in the world who loves their name.  It’s wild that there are so few people out there who like their name. To me, your name, your label is what you make of it. Names are so much more than the word people call you. It’s a word that contains your story and who you are, and often times people assume personality traits, or ways of life, just by hearing that one word.

I asked some of my friends what they thought of, or would think of if they were hearing my name for the first time. What they would think if they just heard “Anastasia,” filtering out all of my real personality traits. Here are a few of their answers:

In reality, my parents had never even seen the movie Anastasia until way after I was born, and although I would love to think that I’m royal, I rarely ever wear a crown and I’m too loud to be a princess.

In reality, my life is just as the opposite of a fantasy. But it would sure be nice to live a magical, story-book life, huh? Filled with genies, and spells, and happily-ever-afters.

In reality, I guess I am bold. However, not in an obnoxious, in-your-face way, but in a more confident, strong way.

In reality, well actually I am unique and I love it, because aren’t we all unique? As it says on the wall of my dance studio, “Be yourself because everyone else is already taken.”. What makes the world special is the fact that everyone’s unique.

In reality, I would say 95% of the time, I’m nothing like the negative connotation of “diva”, but we all get in moods sometimes, right? However, if you look at it as a powerful woman in her field of work, then I sure as heck would love to be that one day.

In reality, I’m actually part Greek (as well as Irish, German, and Italian) and the name Anastasia is a big part of Greek culture. My Greek-American Yia Yia (Grandma in Greek), Aphrodite, is Greek Orthodox and on Easter, they say Christos Anesti, which means “Christ has risen.” It’s kind of funny because my mom’s name happens to be Christine.

Weird how just hearing my name could spark up so many ideas about who I am. If my life was shaped according to that list, I guess that would mean I am a magical Russian princess who likes to speak her mind, stands out in the crowd, and is simultaneously a super diva.

None of those notions included the fact that when I watch a movie I literally yell at the characters because I get so into it, or that I spend most of my time at New York Performing Arts Center dancing and singing and acting. None of those ideas have to do with the fact that my absolute favorite subject is science, or that one of my biggest fears is deep water. Those characteristics don’t portray how I love wearing leggings and over-sized sweatshirts, and really hate wearing jeans. They don’t show how I overuse the words “low-key” and “high-key” or how my favorite shoes are my rose gold and white tap shoes. They don’t speak about how I know every single word to the songs from Grease and Hairspray, and love listening to hip hop music as well.  They don’t encompass the true meaning of the word Anastasia, and the weird, loud, neurotic, overthinking, passionate, caring, bubbly, nerdy perfectionist that comes along with it. 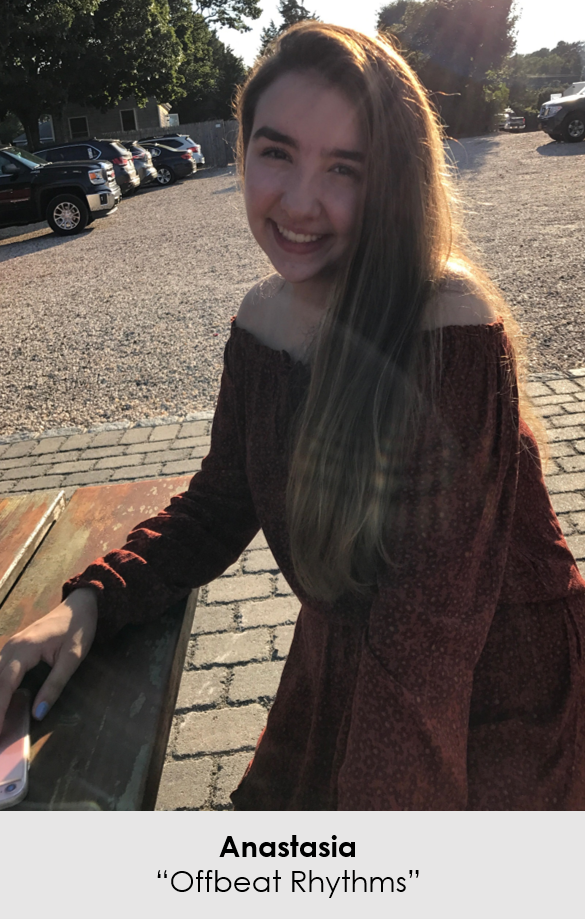 Anastasia Meininger, aka “Offbeat Rhythms”, is a high school student in Westchester County, a suburb of New York City. She lives with her parents and older brother, and her life is filled with her hilarious and loving Italian, Irish, Greek, and German family, as well as her wonderfully crazy, and diverse group of friends.

Anastasia is a normal, yet distinctly unique teenager who loves performing, making people laugh, and even going to school! Her favorite subject is Science, especially Chemistry, and when she’s not studying, you can find her at her dance studio, where she rehearses for her dance competitions, and vocal showcases.